Perhaps the most common manifestation of flagrant disregard for the truth comes when anti-science/anti-animal research individuals describe the nature of research and the character of researchers. Their descriptions stray far from the actual truth, which is that scientists are completely normal, kind and sensible people who have given their lives over to the pursuit of knowledge and the betterment of humans and animals and that their research projects involving animals are humane, ethical and responsible. In other examples, they either directly lie, or mislead through omission, regarding the productive and vital contributions that animal research has made to the life of people and animals around the world.

But the lying doesn’t end there. A recent post from a Southern California activist stretches the bounds of truth by lying not just about debatable points but about basic, documented facts themselves.

Jan Austin Smitowicz wrote recently about his “experiences” while being involved in a series of protests at the homes of UCLA investigators in 2007. Smitowicz correctly sets the stage for these protests in that they followed a series of bungled attempts to exact serious harm on faculty researchers from the University of California, Los Angeles.

In his piece, Smitowicz starts his departure from the truth when he describes these events:

It was the summer of 2007 and things were getting hot in the Los Angeles animal rights world. At the end of June, an incendiary device was left under the posh BMW of a UCLA primate vivisector, Arthur Rosenbaum. It failed to ignite; even so, the Federal Bureau of Investigation was offering a $110,000 reward to any information leading to the arrest and conviction of those responsible. A reward of $60,000 (UCLA contributed $30,000 to each of the reward offers) was still being offered for a similar incident from the prior summer, when an incendiary device was left on the porch of a different UCLA primate torturer, Lynn Fairbanks. The FBI claimed the device—which also failed to ignite—was left on the wrong porch, that of an elderly neighbor. How bad that looks for the radical(s) who performed the action, right? I’m confident it’s a complete fabrication by the FBI–it wouldn’t be the first time…

What makes this particular assertion so bizarre is that the Animal Liberation Brigade and Justice Department (both monikers for animal rights terrorists groups) openly and gleefully claimed responsibility for the events via the North American Animal Liberation Press Office, as they would for similar attacks that continued from 2007 to 2009.

Either Mr. Smitowicz is lying, or he is asserting that the Animal Liberation Front is.  I suppose another possibility is simply that Smitowicz’s sense of reality is less than fully formed.

Nevertheless, this comment only portends a series of truly stunning lies regarding a series of protests that Smitowicz claims to have participated in. He doesn’t mention the date of the protests in question, but he gives a variety of details regarding the protest that are blatantly untrue.

He describes the start of the protest:

Joaquin Fuster doesn’t live in Westwood. Real activists know exactly where he lives because they have been to his home many times, but it’s most certainly not in Westwood.

His memory of events only gets worse from there. He next describes a protest, apparently at my home.

When we arrived at UCLA primate torturer David Jentsch’s lovely blood-money house in Santa Monica, the scene literally took our breath away. It was like nothing I’ve ever seen before. His entire block was barricaded off on both ends. There was an entire line of cops in full riot gear—helmets, padding, batons—stretching across his entire front yard. Cop cars everywhere. Helicopter chopping the sky overhead. Two big city buses were parked at the end of the street; they were empty, and I don’t know if they brought the cops, or if they were there to hustle us all off to prison. Because believe me when I tell you they really, REALLY wanted to arrest us. To say the cops had hard-ons for us doesn’t even begin to describe it. Clusters of them on every corner and at each barricade. Lines of them surrounding his house. It looked like a fucking war zone, but no—just an animal abuser’s house in Santa Monica on a pleasant, warm Sunday afternoon! I counted oversixty police officers, and that was just the ones in uniform. Sixty-plus cops—for twelve activists. More than five cops for every one nonviolent, peaceful protestor. Good to know our tax dollars are being well spent to repress legitimate dissent, eh?!

One scarcely knows where to begin. First, as I said, Smitowicz doesn’t make clear the date of this purported activity, but I never experienced a demonstration at my home until the middle of 2009 (after the car bomb that Mr. Smitowicz probably thinks I set myself!).

Moreover, and perhaps most importantly, just about every other fact reported above is blatantly wrong.

I have not, at any point during my career in Los Angeles, lived in Santa Monica, nor anywhere near it.

The picture below, taken by the picketers, shows the typical police response at my home – SIX officers (not sixty) – in standard uniforms. One wonders where Smitowicz learned whatever math skills he used to count the sixty officers. 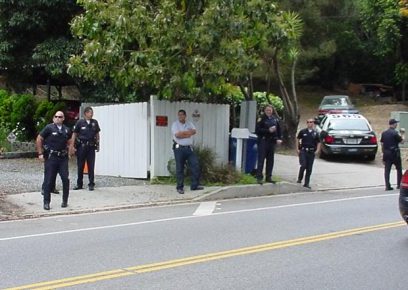 This picture, taken by the picketers themselves, shows the most vigorous police response at a protest at my home. There were not 60 officers, and they were not in riot gear.

I will agree with one point he made above, however, and that is that the officers very much wanted to arrest those protesters who were in violation of the law. These picketers routinely violated municipal codes relating to focused picketing of a residence and disturbing the peace, which is why a group of 9 of them were arrested in 2010 during a protest. The group went on to sue the University and police in federal court for these arrests, and they lost that lawsuit in 2011. The judge dismissed most of the claims of the activist on the (lack of) merits.

With all this inaccuracy, it’s not surprising that the post goes on to add even more in the way of ridiculous nonsense, when he describes the behavior of the protesters during the event:

We walked up and down Jentsch’s block, single-file, keeping close together for at least the psychological illusion of safety and protection… Every so often we would stop and raise our fists in unison, not uttering a sound. We educated the killer’s neighbors. One of them came out of her house and walked alongside us, across the street, for a solid ten minutes, clapping and thanking us for being there, telling her neighbors that it was beautiful that we were there for the animals. Bless her heart!

When we’d get to the front of Jentsch’s house, where the line of riot cops stood holding their batons and trying to intimidate us like the terrorists they are, we adopted a new tactic: the entire length of his house, we stood in line facing the cops and slowly shuffle-stepped sideways, staring into their eyes through the plastic of their protective shields—our eyes, the only parts of our faces visible above our bandanas. When our line was fully in front of the house, just feet from the cops, we’d stop and throw up our fists and whisper together, “ANIMAL LIBERATION!”

Lots of whispering and quiet protest, right? Once again, we can use photos taken by an activist attending the protest to assess the accuracy of this statement. 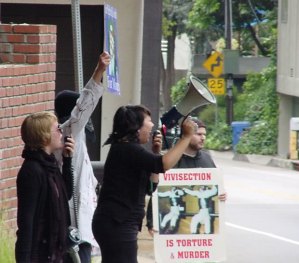 Picketers “whisper” in unison at my home 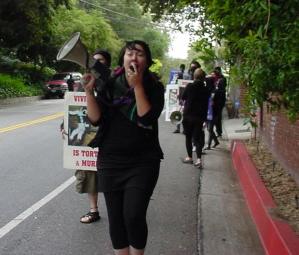 As I referred to in the title to this post, there are lies, and then there are damned lies. This is the latter.

But in a world where those opposed to scientific progress and research are so determined to stretch the truth in characterizing science and scientists, it’s really no wonder they lie so blatantly about the facts of their direct action campaigns.