For more than a decade, the streets in front of the homes of UCLA researchers have been the scene of regular, brutal, vitriolic and hate-filled campaigns by animal rights hooligans. With little direct knowledge of the truth, as well as a exceptional willingness to lie and deceive, they show up with signs and dated chants and disrupt our neighborhoods. Their stated goal is to make us and our neighbors uncomfortable in the conduct of these insane and sometimes illegal protests.

As I have written before, their behavior and conduct is really no different than that of Fred Phelps and his family when they are on their bigoted campaign against LGBTQ individuals or Operation Rescue when it targets women in need to legal medical care. The parallels with the antiabortion protests are, in particular, remarkable. They are, in every way imagineable, a hate group to be classifed right alongside racists, misogynists and homophobes, alike.

Since the inception of these protests, researchers have had little respite and few tools to call upon to address the harm done by these protests.

This weekend, we created a new tool, and it’s one that we plan to use again and again until these demonstrations are over. We have decided to act, with our voices, our messages of scientific progress and – most importantly – with the unity of our community. 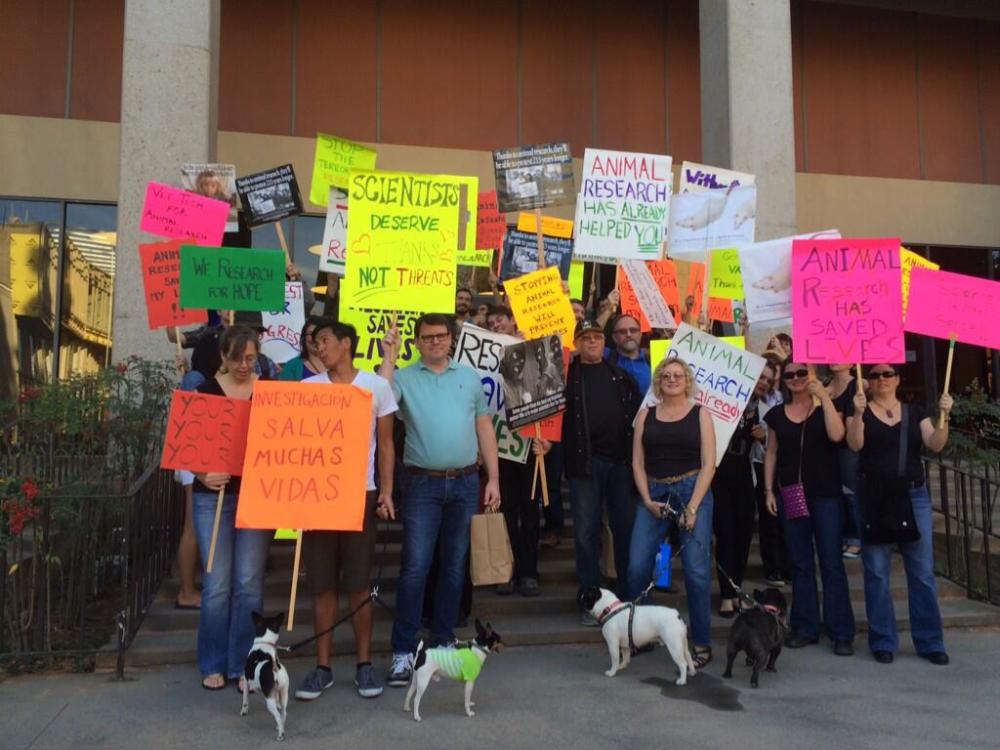 UCLA affiliates meet up on campus, in preparation for our march. We are NOT afraid.

When the ironically named animal rights group, Progress for Science, appeared at the home of my beloved and treasured colleague this Saturday evening, they encountered something they neither expected, nor knew how to deal with.

Conveying our message to the neighborhood and to the protesters.

They found 40+ UCLA researchers, staff, students and friends who were waiting on the streets of Westwood. We outnumbered them 4:1, and the look on their faces as we marched towards their meeting site and intercepted them was priceless. It was unregulated surprise and confusion.

As they began to collect themselves, we broke out in our chant:

They were, in a word, speechless.

No chants and threats from the extremists when surrounded by researchers! One wonders if Carol Glasser’s constant text messaging included panicked calls for help.

How does this differ from their usual behavior? Like night and day. Here’s a video I captured last fall when they protested out front my home.

During this current weekend’s demonstration, they took up a position in a normally peaceful cul-de-sac for about 45 minutes, while our group let them know – in no uncertain terms – that they were not welcome. Their lies, threats and hypocrisy (leather shoes, really?) were all addressed, front and center.

In the end, they turned back in the direction that they came and retreated. Determined to make it clear that they were unwelcome in this neighborhood, our members pursued them. When the extremists approached neighbors and people on the street with their rhetoric, our students and researchers swept in and countered the lies at every opportunity. Progress for Science was flushed right out of the area.

Our message was simple. “DON’T COME BACK!”

Later that evening, when the victorious UCLA group had broken up and gone back home, the hooligans showed up once more . It seems that they were determined to have the last word, if only after we left, because their lack of courage made it impossible to speak in our presence. They chanted for 10 minutes and then left again. Big deal!

Here’s our message to those extremists and to anyone affiliated with them:

This wasn’t the last word.

It was the beginning of the end for you and your tired and useless group.

We are watching and waiting. When you come back, you will find us waiting for you.

The reign of terror you have brought to our neighborhoods is over.

POSTSCRIPT: Another telling of events just appeared the Speaking of Research website, here. Thanks to Dario for his take on the events of Saturday.