As I reported earlier, animal rights extremists in Los Angeles mounted an eleven day stunt to show their mis-guided opposition to the humane and responsible biomedical research involving animals on-going at UCLA and around the world. Their campaign showed their willingness to deprive themselves – but more importantly, people like you and your children – of the much needed medical progress afforded by scientific research.

On one of the first Friday evenings, they showed up outside my home and mounted a “vigil” for the animals they believe are involved in research at UCLA. A tiny group of 6 individuals showed up with glo-sticks and stood in the street reciting poems. The only real indication that this motley group (a strong word for such a paltry few individuals) were even on site was the repetitive flash of the camera – they had brought along a professional photographer to document their vigil. As I said earlier, it was a “stunt” after all. 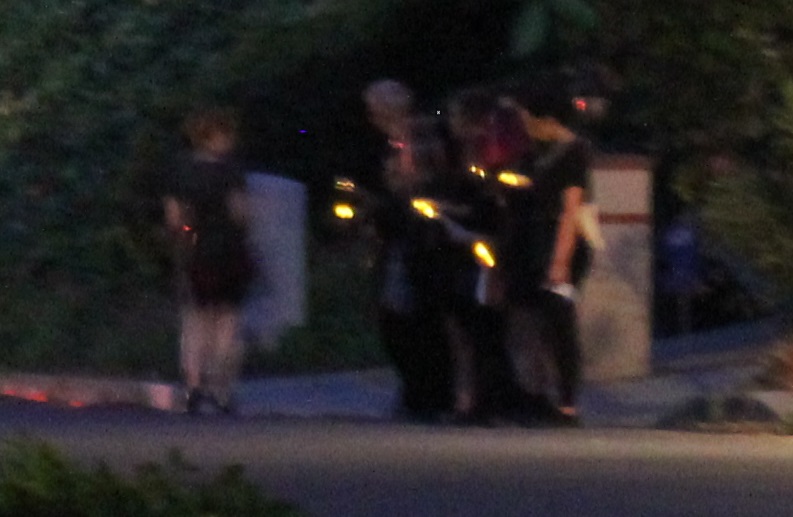 A Progress for Science vigil at my home.

Later in the week, they mounted demonstrations at other colleagues’ homes and undertook phone/email harassment campaigns. These other demos were more consistent with their usual behavior: chanting threats, cursing and screaming for UCLA researchers to “burn in hell”.

For these reasons, it’s particularly ironic that Los Angeles-area activists plan to show up in Westwood this Saturday in engage in a “Day of Action against the AETA”. AETA is an acronym that refers to a federal law called the “Animal Enterprise Terrorism Act”. It’s a law that, essentially, makes the penalties worse if terroristic acts are used to target scientists involved in legal animal research or other animal-related activities like raising animals for food, breeding animals to make loving pets or even training dogs to be service helpers for paralyzed persons. Yes, animal rights extremists (emphasis on EXTREMIST) target people in each of these categories, and the AETA is designed to end that harassment.

But extremists now fear that they can no longer get away with hurling threats and harassment, and after a decades long campaign to end the free speech of scientists, dog breeders and the like, they are now claiming that it is they who are being persecuted. It is truly amazing to me how bullies can run for cover and beg for protection the minute there is any chance they’ll get in trouble for pushing other people around. What this Saturday march really proves is that animal rights fantatics believe that their First Amendment rights trump ours. They believe that the law should protect them above all others.

But what kind of speech is it that they are afraid of losing?

The AETA does not infringe Constitutionally-protected activities. What it does is ensure that people that are thinking about crossing the line into criminal actions know the law is ready to stop them. Two Los Angeles activists are feeling the weight of the AETA now because they are being prosecuted by the US government for their criminal attack on a mink farm in the midwest. Their prosecution has nothing to do with speech – it was their CRIMINAL ACTIONS that are being targeted. These are the same two individuals who have marched in front of the homes of UCLA researchers for years, once again showing that the line between First Amendment-protected protest and criminal actions is blurred by many animal rights extremists. It also shows that the speech that they so desperately wish to protect is actually their own hate speech.

So, when activists show up to march this Saturday, I hope people will let them know a few simple facts: the speech and thoughts of animal rights fanatics is NOT more valuable than that of others. They are NOT immune from being responsible for the consequences of their words and actions. They are NOT above the law.