Somewhere in the United States, there is a scientist reporting data that says that humans are causing the world to warm at an alarming rate. In return, he receives email death threats.

In another case, a pediatrician is harassed and shouted at because, in her expert view, vaccinations are necessary and safe for children and prevent a whole range of childhood diseases.

And then there is the medical researcher who is threatened because he has been responsible for generating embryonic stem cells and suggesting they might be a cure for Alzheimer’s disease.

Finally, there is the law professor who is nearly killed by a bullet because of his views on Middle East politics.

These are not hypothetical situations. This is the real work of a growing number of fanatics living on the fringe of society.  The anger generated by their failure to make a persuasive argument to the public, amplified by their sense of self-righteousness, is sufficient to convince them they are entitled to use violence to achieve their goals.

One of the most salient examples of this type of fanaticism is exhibited by animal rights extremists.

Researchers, professors and students at UCLA have been the targets of terror tactics for so long that it’s easy to forget the history or to ignore the fact that it continues today. The present wave of criminal attacks goes back more than a decade.

Here is a very short summary:

Back in 2003, Neurobiology Professors John and Madeleine Schlag saw their property vandalized at a home demonstration. “The way it proceeded … we felt that the door was going to be kicked in,” they commented in an interview.

In 2006, Professor Lynn Fairbanks was targeted with an incendiary device. It turned out animal extremists got the wrong address and planted the firebomb at the doorstep of an elderly neighbor.

In June 2007 another firebomb was placed under the vehicle of Professor Arthur Rosenbaum, who dedicated his life to pediatric ophthalmology by helping children with strabismus. His wife later received a threatening note which told her to persuade her husband to stop his research or “…we will do exactly what he does to monkeys to you.”

In 2007, Professor Edythe London finds her home flooded by animal rights extremists, and received the threat, “water was our second choice, fire was our first.”  She decided to reply by explaining, in a thoughtful OpEd in the LA Times, the reasons for her work.

In 2008, the UCLA community saw once again an incendiary device char the front door of a home owned by a Professor, the vandalism of three vehicles parked outside the home of a postdoctoral student, and the firebombing of a university commuter van.

Then, in 2009, the car of Professor David Jentsch, parked in his driveway, is set on fire while he was sleeping at home.  He subsequently received a letter containing razor blades and a threatening note that fantasized about sneaking up behind him and cutting his throat. He replied with an open letter to these coward terrorists. 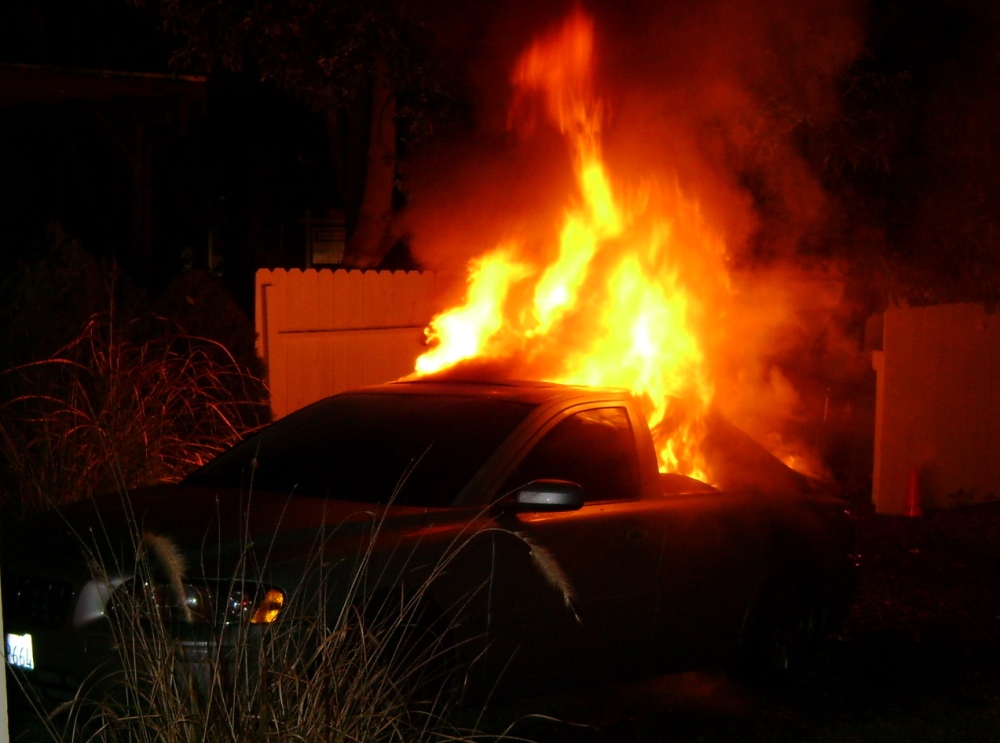 Though these events are graphic, frightening and chilling, they were neither the beginning, nor the end of the violence propagated against us. These criminal vandalistic acts have been accompanied by monthly “home demonstrations,” conducted by screaming mobs who shout obscenities and taunt researchers from the street.  These assaults on our residences are the essence of violence, aiming to turn safety and security into fear and panic.

Picketers demonstrating in the street in front of a researcher’s home.

These groups (which have organized under a range of monikers: “See You in the Streets”, “FUCKHLS” and [now, quite ironically] “Progress for Science”) claim that their demos are educational, a form of genuine activism or simply “prayer vigils” that honor the lives of animals involved in research. No one should be deceived. They are little more than liars and thugs whose goal is to inflict fear in researchers and our neighbors, and their own words show this to be true.

Over the years, these demonstrations have typically been followed up by “wrap-ups” written by the protesters, right alongside the publication of “anonymous communiques” that include direct threats and patent lies about our research. Their words show them for who they really are.

On Feb 19 2011, this group (including members who still protest to this day), marched out front of the home of Dr. London. Knowing that she is the daughter of Holocaust survivors, they cut right to the chase:

“… Edythe London – aka “Hitler with a cunt”. She does things to primates that even Dr. Mengele didn’t do to Jews, gays, gypsies and other disenfranchised people in Europe. Though she claims to be Jewish, she must be somehow related to Hitler, since she uses the same methods of hideous deprivation, abuse and killing of our closest living relatives, non-human primates.” (WARNING: the following link takes you to an AR website: Click here for the full post).

On another occasion, this group marches in front of Professor Jentsch’s home, with a reporter from Los Angeles Magazine in tow. The reporter is writing a feature on the struggle between researchers and activists. Even with the scrutiny of the press, they can’t help themselves:

And later, the leader of the group whispers to the reporter:

“Wasn’t Jentsch’s car burned or something?” Then, above the din of chants, she adds, “I don’t know how to put this—I only wish he were in it.”

That kind of language is hardly surprising when you see the general pattern of behavior during these aggressive and hateful demonstrations. An April 2010 demonstration is summarized here:

When we attempted to open up dialogue on the science and ethics of animal research, including the points of view of animal rights activists, by organizing a discussion panel at UCLA, the only thing we got in return from these activists was more threats:

Activists protested him [Dario Ringach] and will continue to protest him because he has become a defacto leader of the pro-vivisection group ‘PRO-TEST’ where he now speaks out to anyone who will listen regarding the need to torture and kill animals, especially primates. In fact, he is one of the speakers who will be at the “discussion” panel February 16th at UCLA’s Covel Commons.

All the neighbors came out to see what was going on and activists filled them in on Dario’s long, atrocious history of abusing, torturing and killing primates and now his NEW job of going around PROMOTING it! The neighbors were actually very supportive of the activists and in fact, one neighbor told an activist and we quote, “I’ll be watching that asshole; I don’t want that piece of garbage and his family living in this neighborhood. He ought to be experimented on.”

They went as far as targeting his children because of his pro-research stance (here and here).

So do not believe a single word when extremists argue that what they want is dialogue.  Here is their rephrasing of the truth:

When attempts at dialogue and peaceful attempts to make change and alleviate suffering are frustrated, some activists are willing to use more forceful means to help animals. North American Animal Liberation Press correspondent Camille Marino makes an apt comparison: “LA citizen Richard Ramirez, known as the “Nightstalker”, was a cold, sadistic and violent serial murderer — his behavior was eerily similar to that of any vivisector. While he was actively inciting an atmosphere of terror, the media relentlessly covered the newsworthy developments. While vivisectors like J. David Jenstch and Dario Ringach are active, the animal liberation networks are committed to relentlessly cover their sociopathic reign of terror. When average citizens finally apprehended Ramirez, they beat him mercilessly for his crimes. Jentsch and Ringach have earned the right to fear retaliation for their crimes. … They each make a potent case for individuals who need to be stopped by any means necessary.”

How have scientists reacted?  In a couple of occasions the UCLA community conducted campus rallies in support of our faculty and the fantastic work done at our university.  The message was that we are not going to tolerate such attacks any more.

So it should not come as a surprise to anyone that after a decade of harassment, intimidation and threats,  we have decided to mount counter-demonstrations when these animal right terrorists show up at our homes.

These activists now have the shameless audacity to play the victim of this encounter. Incapable of understanding the message, they are now recruiting more misguided individuals to join them in their fanatical crusade and come back to harass us at our homes on February 15th.

We will be there to meet them once more and convey one simple message,

We are not going to take it anymore!

Please join us to defend UCLA, our science, and the hope for medical advances and new cures.

When: February 15, 10:15am sharp!
Where: Outside Franz Hall on the UCLA campus (near the intersection of Hilgard and Westholme Blvds)

Join us to end the decade-long age of terror at UCLA!