On 7 March 2009, extremist elements in the animal rights movement bombed my car in an attempt to intimidate me and end the research that I conduct in my laboratory at UCLA. This was just one more event in a long line of horrific, violent and sometimes haphazard attacks propagated against UCLA neuroscientists by Los Angeles animal “rights” activists.

Car arson at my house on 7 March 2009. The Animal Liberation Brigade would claim responsibility for the attack 2 days later.

Sadly, it was far from the most blood-thirsty action radical political extremists were to undertake in the US that month. Just a few weeks after my car was incinerated, a Wichita, KS, physician – Dr. George TIller – was assassinated by an anti-abortion fanatic while serving as an usher at church on the morning of 31 May 2009. Dr. Tiller’s long career providing essential health services to women in need was cut short.

As has been noted before, there are extensive similarities in the tactics used by radical animal rights terrorists and anti-abortion groups like Operation Rescue. Threats, direct targeting, hatred, vitriol, lies and deception, arson, bombing and criminal violence are the currency that both groups spend readily. They intend to win by force, rather than by reason, civility or virtue. Their hollow arguments having failed to persuade the American public, they resort to intimidation to win their gambit.

I am very familiar with Dr. Tiller’s murder for two reasons. First, I strongly support a woman’s right to choose, and on behalf of my mother, sisters and women everywhere, I was offended deeply by his murder. His assassination was intended to suppress other physicians and to stop women across America from being able to make decisions about their own bodies. Of course, animal rights extremists who targeted me had a similar goal in mind. They wanted to frighten researchers everywhere with a simple message: you could be next. Furthermore, they intended to deprive people across this country from the right to access the treatments that come from medical progress.

I was also familar with Dr. Tiller because animal rights fanatics began sometimes referring to me as David “Tiller” Jentsch, implying that I would come to share his fate. The perverse writings online revealed the deep psychopathology of animal rights individuals and exposed their hatred and death fetishes.

Since then, they have targeted me continuously. They have harassed my students; they have sent me “AIDS-tainted razor blades” in the mail; they have launched phone/mail/email campaigns against my department; and they have engaged in repeated, and often criminal, protests intended to intimidate me at my home. 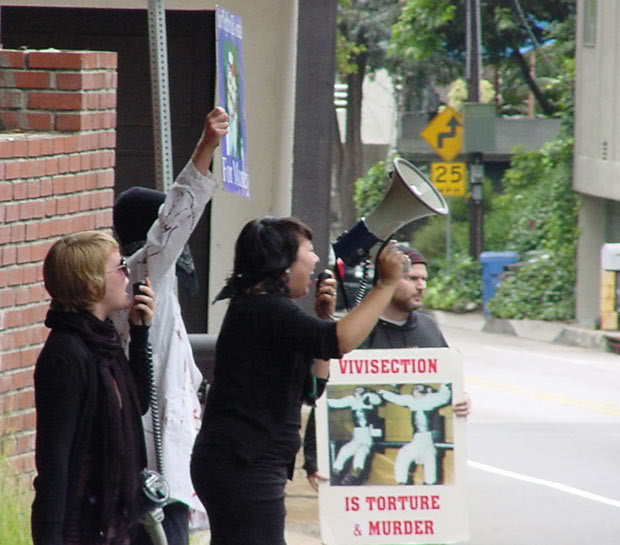 Picketers demonstrating in the street in front of my home.

But here’s a fundamental truth: more than five years after they began their hideous and violent campaign against me:

I am still here.

Contrary to the intentions of animal extremists, the scope and impact of my research has grown and proliferated. Yes, their hatred has caused me fear, resulted in endless loss of time and productivity and represented a real and significant impact on my work. But their hatred has only strengthened my resolve and determination to make the kinds of scientific contributions that I know that our society needs and wants.

In 2009, the misanthropic face of the pro-life movement was exposed by the murder of Dr. Tiller, and it was then rejected by many across this country. A corner was turned, and a door was closed on Operation Rescue.

It is time for a similar development in our struggle against fanatical animal rights elements. People’s lives are being ruined, and the scientific community remains mostly silent. We must throw light on the pathology of the animal rights movement and move strongly to swell social support for our responsible work.

Sadly, there is much left to do on the part of rational scientists and the public who benefits from our work. I continue to urge that we collectively do more than we do today.

And in the mean time, I am still here and no fanatic can change that.